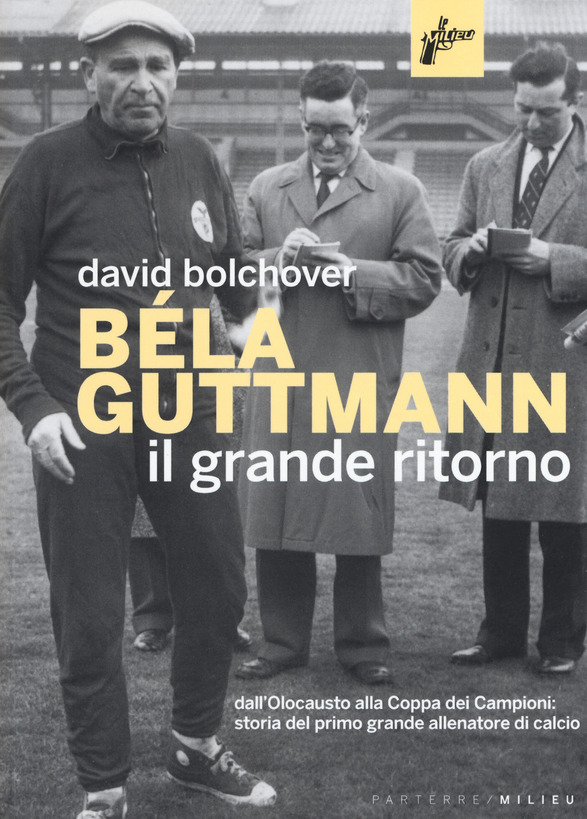 What did you prompt to write the book about Bela Guttman?

I could not resist it. For me, the Béla Guttmann story is the most remarkable individual story in the history of the world’s most popular sport. The more I discovered, the more remarkable itbecame. It was a passion for me, an obsession.

Arpad Weisz, Bela Guttman, Egri Erbstein and more….is the jewish football really existed so brilliantly? Why have we lost any trace about it today?

There are several reasons why we have lost this memory. The first and most important reason is of course the Holocaust. The Central European Jewish culture from which these people came wasmore or less destroyed. There were few Jews left from these areas to pass on these incredible stories, or to claim these great men as their own, as fellow Jews. This is what happens with genocide – it destroys both people and collective memory. These players and coaches are therefore lazily referred to simply as “Hungarian” or “Austrian”. The vast majority of the world’s Jews now live in the United States and Israel. Soccer is not a big sport in the United States, and American Jews are therefore mostly uninterested in its history. In Israel, they have been more preoccupied with building their own identity and folklfore and have paid less attention to the exploits of diaspora Jews.

In his book Vicente Feola writes that Brazil’s success at the World Cup in 1958 depended on Guttman’s work, Jonathan Wilson writes in his book “ The Inverted Pyramid”: it is absolute sure that footballs hasn’t been the same yet since Gutmann has left Benfica in 1962. What is the merely tactic bequest was left by the Magyar coach?

Yes, he is often credited with bringing the 4-4-2 system to Brazil, who then won the World Cup using that system. Wilson believes that it was more that Guttmann encouraged Brazilian to play in a more direct way, to speed up the attacks, to get the ball into the opposing penalty area more quickly. I think his biggest innovations in coaching were outside the tactical sphere.He was very innovative in training techniques, in his demands that players adopt a healthy lifestyle with the proper diet and nutrition. He was also the first coach to use the media so successfully to gain advantage for his team. He believed that the press conferences before the match were anopportunity for him to motivate his players and intimidate the opposition.

Often in your book there is comparison between Guttman and Mourinho, who seems to be his fan, but before the Special One Helenio Herrera hasn’t modified his style? Do you think that Herrera’s emulation is voluntary?

Herrera’s Inter team was known, perhaps unfairly, for its focus on defence rather than all-outattack. Guttmann often criticized defensive football. “0-0 is fine as a latest score,” he said.” But I can’t accept it as a final score.”

Your research has been really accurate, as your aknowledge and your huge bibliography fully demonstrate. Despite the support, considered by the awareness of the argument, have you found some obstacles during your work?

The biggest challenge for me in terms of research was that most of the sources were in Hungarian, Portuguese, German or Italian. I therefore had to find good translators and researchers as I do not speak those languages. Another challenge was that Guttmann had no children who might have been able to help me with the research.

All the larks and deprivations suffered by Guttman and by all the Jewish population should be a reprimand for the next generations, neverthless today in the football and almost in all fields we discuss about racism and antisemitism. Really we haven’t learnt anything from the hystory?

Anti-semitism in particular has been a massive problem in Europe for centuries, eventually resulting in the virtual extermination of the Jews of Europe. There are few Jews left in the continent, but the anti-Semitism which destroyed them is still very much alive, now mostly directed against the State of Israel. I think we have to accept that anti-Semitism is a permanent feature of European culture.

In the Brazilian Olymopic Games an Egyptian judoka refused to shake his Israelian opponent’s hand. This news became soon virale to prove that antisemitisms still live into the sport world. Do you think is it true also for football?

Yes, I think it is true in football, where anti-Semitic chants against teams associated with Jews (Tottenham, Ajax) are commonplace. And talking of shaking hands, the great Egyptian player Mohamed Salah refused to shake the hands of the Maccabi Tel Aviv players when he was playing for Basel.

Why Bela Guttman has failed in Italy? Is only a matter of his preparations methods, if we consider that he had good chanche to win with Milan?

At Padova, Triestina and Milan, his teams started the season very well, and then faded. The intensity of his training techniques, his focus on supreme fitness, exhausted the players. There is some evidence that he relaxed his techniques during his golden period at Sao Paulo, Porto and Benfica (1957-62), even adopting a rotation system (resting players in important games).

Without deny the unquestionable merit of Guttman with Benfica , how much does it owe to an unique generation of talents formed by Eusebio, Costa Pereira, Mario Coluna, etc..?

Of course, great players do help. But Guttmann also won the league with Sao Paulo and Porto. Also, he was disadvantaged by Benfica’s rule that they could only have players who were born in Portugal or the Portuguese colonies. He couldn’t sign the world’s best players like Real Madrid with Puskas and Di Stefano. And don’t forget that it was Guttmann who signed Eusebio, and that he won the Portuguese league and then the 1961 European Cup without Eusebio (Eusebio only played in the 1961-2 season).

Why didn’t Guttman become a mouthpiece and a witness about his life after his survival from Holocaust? May be he thought that society was unripe to accept his testimony or on the contrary did he decide to avoid this moral duty?

In Europe after the war, nobody wanted to hear about the Holocaust. Many people in Europe (not everyone of course, but many people) either participated in the murder of the Jews, were happy to see them murdered, or just simply turned a blind eye to mass murder. Guttmann was an ambitious man who wanted to succeed in Europe. He was not going to irritate people by discussing his experiences. In his 1964 autobiography, published in German, he discussed the war ​years in just a few short sentences. The word “Jew” did not appear in the entire book of 80,000 words. But who were his readers? Mostly German and Austrian men of a certain generation. Guttmann was not stupid. He knew which subject to avoid.